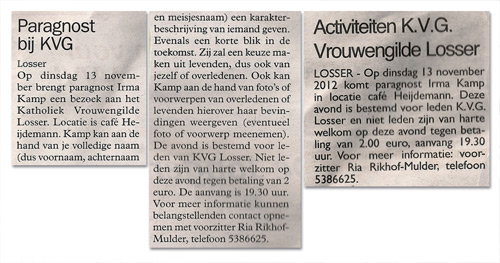 Metro asked two psychics what 2014 would bring us. Tarot specialist Wim Helsdingen and medium and magnetizer Irma Kamp focused on topics that kept us busy that year. Together we look back. Did their predictive ability work, or were they completely wrong? And what do they think 2015 will bring us?

World Cup football.
Wim let us know that sports predictions are not his thing, but he gave it a try. The boys from Oranje would strand in the third round.

Irma was given even less detail, also indicating that sport is not her strong point, but would win “a temperamental” country. The Netherlands does not.

Who was right? If the group stage is before round 1, the Netherlands was eliminated in the fourth round. Wim was wrong. The winner of the World Cup was Germany. Opinions may be divided, but they are not often labeled as a temperamental people. Both predicted well that the Netherlands did not win.

Olympics
Wim saw at least eight medals for the Netherlands. Irma talked about nine slices. Four gold and two to three silver. We would excel in skating, Irma was very sure.

Who was right? The Netherlands won 24 medals, but Wim emphasizes, eight of them were gold. And while not surprisingly, we absolutely excelled at speed skating, as Irma predicted.

Elfstedentocht
Wim talked about a quick winter and certainly not an Elfstedentocht. Irma also heard a clear “no”.
Who was right? Both.

Eurovision Song Contest
Wim saw Ilse and Waylon crystal clear in the final. But they wouldn’t end with the first three or four.

Economic crisis
Wim saw a ray of hope in 2014, a boost around August or September. Something with the euro, construction sector or export.
Irma also predicted that construction would pick up, but in small steps.
Who was right? The year of construction 2014 will go down in the books as a year in which some recovery took place, but not across the board. As Irma predicted. According to him, the bright spot of Wim did take place, but he could not say exactly what it was. It would have to do with a statement by Minister Kamp.

Who was right? Irma was right with her prediction of a crisis meeting at the end of the year. The Christmas crisis surrounding Schippers’ healthcare law. And with that, Wim’s prediction was also correct, he emphasizes, because the proportions were certainly sharp.

Wim predicted a “good summer holiday” with lots of sun. Irma felt extreme heat in the summer of 2014. And saw that farmers would have a hard time, because a lot of rain would fall. Who was right? August turned into a rainy month. The two months before were sunny and warm. As for Irma’s peasants, they certainly had a hard time, but that had to do with the Russian boycott.

General prediction
Wim talked about an unpleasant situation at a drilling platform off the Dutch coast. He also saw our royal couple in dark clothing.
Irma hoped that the king would be better protected, she feared for his safety.
Who was right? There was nothing unpleasant with a drilling platform, Wim also confirms. But our royal couple did wear dark clothes. MH17, and Maxima’s father who was hospitalized, were the reason for this, Wim tells afterwards. Irma’s prediction did not come true as far as is known.

Elfstedentocht
Wim: No Elfstedentocht this year. Last year I already said that 2016 is the year in which there is a high probability of the tour of tours. I see that again now.

Irma: I don’t feel anything during an Elfstedentocht this year. Earlier I predicted 2017 and I still see it that way.

Eurovision Song Contest
Wim: It will be a battle again. Last year it was with Austria, now it will be with Ireland. In any case, Trijntje makes the final, and she has a big chance of winning.

Irma: She will finish in the last eight, that’s all I get through.

Economic crisis
Wim: The restrictions imposed by the Russian boycott will be relaxed in the second half of the year. Great concern for the less fortunate. Food banks are struggling and can barely cope with demand.
Irma: Things are slowly improving economically. Another better year than last year, but the improvement is very slow. I see the same in the construction sector: those small steps forward again, just like last year.

Politics
Wim: April / May there will again be major unrest in the House, especially among the government parties. That will have something to do with an appointment or a reappointment.
Irma: There will be a fight. Quite some tension around Geert Wilders. Halfway through the year and in the autumn period, discussions flare up about him. It will be talked about a lot. There is pulling back and forth.

Again
Wim: I have nothing to say about that. I don’t make weather forecasts, that’s not in my focus right now.

Irma: Time is hard to determine for psychics, but I feel a warm summer. There are many warm days in July and early August, followed by a lot of rain.

Also in 2015
Wim: Prince Harry of England is going to settle down, I expect an engagement. Princess Mabel will take on more public duties and will be seen in the company of an important public personality. Ilse de Lange is going to expand. I say: family expansion, question mark. Can also be an extension musically. I do not rule out that she will work with Waylon again.
Irma: There will be more attacks, as happened in Paris. An attack is launched in the Netherlands, but it is prevented. I feel something very strongly about an attack in London and Germany.

Ricardo Janssen (RJStylo) made and recorded a song especially for me. Thanks Ricardo !! [youtube width = “550” height = “440”] http://www.youtube.com/watch?v=njWVNRyjBjk [/ youtube] “My name is Ricardo Janssen and I am 17 years old, I started 2 years ago with rapping because my father had a brain haemorrhage. That was the reason to take my first steps in music and as a songwriter. I am now busy with music to get as far as possible of course but of course I cannot do that alone. I recorded a special song for Irma in the studio. The song is called Special (Irma). I really like that I was able to do this for her because the song is actually about her how I see her and how I describe her. To listen to more of my songs, go to www.youtube.com/rjstylo. “

Miriam’s experiences with Irma over the last 18 years

Almelo, 18 March 2010
Dear Irma,
We got to know each other about 18 years ago. I came in contact with you by someone telling me, “There is a woman in Hengelo who is very good at telling the future and can help to relieve pain.” Through all these years you have not let me down! Your predictions are clear and the person for whom you did them has no problems applying them both in business as well as in private situations. Aside this, you also give good advice.
Over the years I’ve watched you grow as your predictions became better and clearer.
I think that you get better and stronger everyday. I am always impressed by the detail of your predictions and the clarity with which you explain them. It is incredible how you can define people’s characters from business-cards and photos and make predictions from them and always in a conscientious manner without causing harm to people.
I sometimes hear people saying how scared they would be to go to a clairvoyant, but with you, no one need be afraid. You make people feel at ease and even when the message you have to convey is not so pleasant you still help to find a solution. When leaving you people are more relieved than anxious. If I look back at what you have predicted for me the majority has come true. Your predictions varied from, finding another job, a move that I had absolutely not anticipated, finding a new love in my life to divining a leak in my house.
All-in-all, over all these years, I have regularly consulted you and hope to carry on doing so for many year to come. I wish you lots of success and hope that you can offer a helping hand to many more people.
Heartfelt wishes and a big kiss